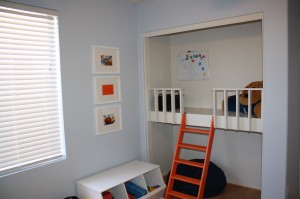 I was tired of my 2-year-old son Parker’s playroom being so unorganized and mismatched.  I decided it was time for a fun change!  I hired our handyman Mark, from A-Stat Property Maintenance, who by the way is our handyman for all of the rental properties we manage.  I told Mark my ideas and without hesitation he said he could tackle the project of turning the closet into an awesome loft!  I don’t think he ever imagined he would be building children’s play areas.  He normally is my guy that fixes broken garbage disposals and paints and trims trees.

So here is how Parker’s playroom was remodeled….We removed the closet doors and current shelving to make room for the new platform and lets not forget the safety railing being Parker is only 2 years old.  We decided to install the new platform, which was made from top of the line oak, about 4 feet from the floor.  This would give Parker enough room underneath the loft to play.  So how does Parker get up to his loft?  An orange ladder of course!  Mark built a custom ladder that hooks down into the platform and I painted it bright orange.